There’s nothing worse than when a natural disaster strikes a community close to home. From fires to floods to hurricanes, Americans have experienced it all. Yet with the help of our friends, family and neighbors, we get back on our feet, dust ourselves off, and start over. I love the resolve of Americans. It’s one of the many things that makes this country so great. And that’s one of the themes I thought about over the 4th of July holiday weekend.

If you scan the news headlines, another theme will start to take shape. Simply, t-shirts help raise money and unite communities. Here are a few highlights. 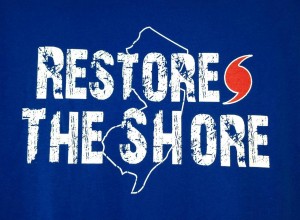 When Hurricane Sandy hit the East Coast back in October 2012, New Jersey native Scott Zabelski (owner of Blue Wave Printing) leapt into action.  Zabelski  dreamt up a simple motto, “Restore the Shore”, designed and printed some t-shirts, and quickly found a demand for these great tees. 9 months later, Zabelski has donated over $500,000 to help with Hurricane Sandy rebuilding efforts.

Following in Zabelski’s footsteps, MTV came out with Hurricane Sandy “Restore the Shore” t-shirts as well. As did ERGO Clothing. And GlobalTech East Inc.

Editorial Note: GlobalTech East, Inc. and Blue Wave Printing both filed trademark applications with the  U.S. Patent and Trademark Office for the phrase “Restore the Shore.” Interesting enough, Blue Wave Printing was recently recognized by the White House for their philanthropic efforts.

On June 30, 2013, 19 firefighters (AKA the Hotshots) were killed by the Yarnell Hill Fire, which also destroyed half of the town. The city of Prescott, Arizona celebrated the 4th of July somberly, recognizing the 19 firefighters in a variety of ways. X-Treme Apparel designed a commemorative t-shirt to honor the fallen firefighters with a design that reads “Arizona Remembers 6-30-13.” 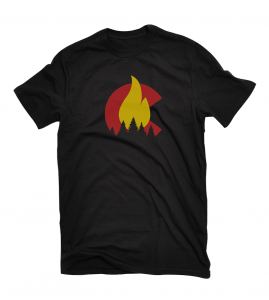 Colorado has been repeatedly devastated by forest fires the past few years.

WildfireTees.com was formed originally to help raise dollars after the Waldo Canyon fire ($300,000 was given to local charities). But when the Black Forest fire destroyed more than 360 homes, a team of designers developed a new t-shirt design to help raise funds for the Pikes Peak Community Foundation. So far, the team has been able to donate more than $75,000.

Editorial Note: Wildfiretees.com has some really impressive designs that are worth checking out. Okay, all of their designs are impressive. 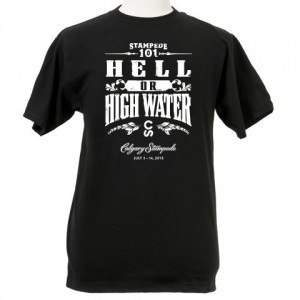 Here in Iowa, we are no strangers to floods. In 2008, flood waters consumed Cedar Rapids and earlier this year, Waukon, Iowa was overcome with flash flooding. To help raise money for the Allamakee Flood Relief Fund, Epic Wear is selling t-shirts.

North of us, Calgary, Alberta (Canada) was devastated  by a flood in June. The Calgary Stampede, an annual rodeo and festival, raised more than $500,000 by selling t-shirts with their “Come Hell or High Water” motto. Proceeds from the t-shirt sales will go directly to the Canadian Red Cross Alberta Floods Fund.