Skittles and Progressive Get Marshawn Lynch to Talk 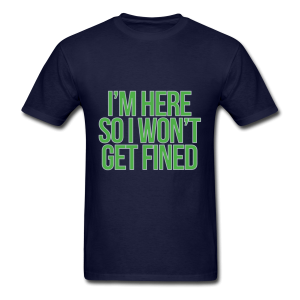 “I’m here so I won’t get fined” Marshawn Lynch

Nice work out of Progressive Auto Insurance and Skittles. They managed to get Seattle Seahawks’ elusive running back, Marshawn Lynch to talk to the cameras. The irony of the whole situation is that it took a little money. Sponsorship money.

If you aren’t following this story, here’s a quick recap: Marshawn Lynch hates talking to the media. (That’s the short version)

Marshawn Lynch hates talking to the media so much, that he’s willing to pay some crazy NFL endorsed fines…the last one being $100,000. As a result, the NFL threatened to slap Lynch with a $500K fine if he didn’t talk to the media during the NFL’s Super Bowl Media Day on Tuesday, January 27. So instead of answering the media’s questions, he replied with a simple response: “I’m here so I don’t get fined.”

That made me chuckle so I had to print a shirt of the now famous quote which you can grab on one of our sister sites: SuperAwesomeTshirts.com.

I have to tip my hat to a couple of brands who took advantage of this story with a couple of brilliant spots: Skittles and Progressive Auto Insurance. Check out the commercials below. 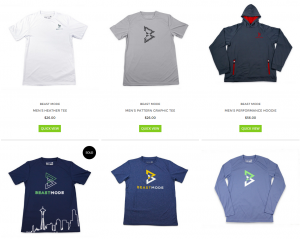 If you’re a Seattle Seahawks fan and since you’re on my t-shirt site, I’m guessing you might be interested in Marshawn Lynch’s line of clothing available on BeastModeOnline.com. They have everything from graphic t-shirts and hoodies to pull-over fleece jackets and long-sleeve shirts…all of which are nicely designed. While I’m a Minnesota Vikings fan, Seattle is my second favorite team and I’d be lying to you if I said I didn’t love the Seattle skyline t-shirt on their site.

Check out BeastModeOnline.com for more information.