Robert Griffin III Told To Turn Christian T-Shirt Inside Out 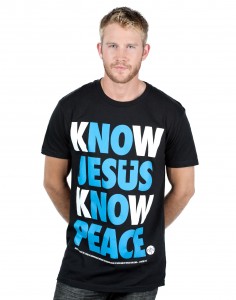 This NOTW “Know Jesus” T-Shirt is available for $23.

It’s no surprise that Robert Griffin III (RGIII) wears his faith on his sleeve…literally. Over the weekend, the Redskins quarterback unfortunately turned his ankle awkwardly during a play and ultimately dislocated it. After the game, RGIII wobbled into the press room (in crutches) wearing this “Know Jesus” NOTW t-shirt.

According to this SI.com article (RGIII turns t-shirt about ‘Jesus’ inside out at press conference), Tony McGee, a NFL Uniform Inspector and former Redskins player, instructed RGIII to turn his shirt inside out because it violated an NFL dress code policy – namely that t-shirts need to be Nike branded.

While some Christians are likely to get pretty bent out of shape about the NFL enforcing this policy and preventing RGIII from wearing his faith-based shirt publicly, I can understand their business policy. RGIII was representing the Washington Redskins and the NFL at the time of the interview. If he worked for the USPS or UPS, he would be expected to wear his company’s standard uniform.

The unfortunate problem with this situation is that Nike doesn’t really produce Christian-based apparel. Maybe that’s something athletes like RGIII could help design and market?  While I’d prefer the Christian apparel market remain mostly independent, it seems like Nike is missing a potential marketing opportunity here.

What Are Your Thoughts?

So what do you think of the NFL asking RGIII to turn his shirt inside out? Also, if Nike made Christian-based apparel, would you wear it?

Erik Carlson, is the founder of Lighten Up Gear and Bald Tees. By day, he manages the digital marketing efforts of a large manufacturing brand. By night, he’s dreaming up shirt designs, playing the guitar and singing. And 24/7/365 he’s following Christ and loving on his wife and 3 children.