A couple of nights ago, we were blessed in seeing and worshiping along with Rend Collective Experiment – a great worship band from Ireland. My wife and I planned to go together on a date but we were surprised earlier in the day when our 6th grade twin sons asked if they could come along with us. While I was originally looking forward to my uninterrupted conversation with my wife, we were equally blessed to have our boys tag along to the concert with us.

So let’s back up a couple of steps. If you’ve never heard of Rend Collective Experiment, I would say their music sounds similar to Mumford & Sons and the Lumineers for example. Don’t believe me? Then check out this music video of “Build Your Kingdom Here.”

The opening band that night was Bellarive – a band I had heard of but never really listened to before. Their music is pretty epic and I felt like they delivered a pretty powerful punch as an opening band. I particularly enjoyed listening to and watching the lead singer, Sean Curran, who has a unique sound. If you’ve never heard Bellarive before, then I think you should take the time to watch this video of them performing “Taste of Eternity.”

Rend Collective came out swinging and played an incredible show. Chris Llewellyn, the lead vocalist in the band, is an incredible musician and has an amazing voice. He’s entirely fun to watch as is the ENTIRE band. Rend Collective Experiment played most of the songs off of their latest album, Campfire including: 10,000 Reasons, Your Are My Vision, Build Your Kingdom Here, Desert Soul, and Praise Like Fireworks. One of my favorite moments from the concert was worshiping to Alabaster – what a great worship song! Admittedly, I was disappointed that they didn’t play my favorite song entitled “Second Chance,” but there’s a chance we might get to see them later in the year…so you never know.

As you would expect with any decent Irish band, Rend Collective Experiment is coming out with a new album on St. Patrick’s Day entitled “The Art of Celebration.” The band played a new song off of the album entitled “Lighthouse” and it definitely made me want to fast forward a month so I could listen to the new tunes.

As a t-shirt connoisseur, I perused the tees both bands had hanging up. While one of my twins wanted their simple clover t-shirt, I was drawn to their “Build Your Kingdom Here” tee…but that doesn’t surprise me because I’m naturally drawn to that design style. 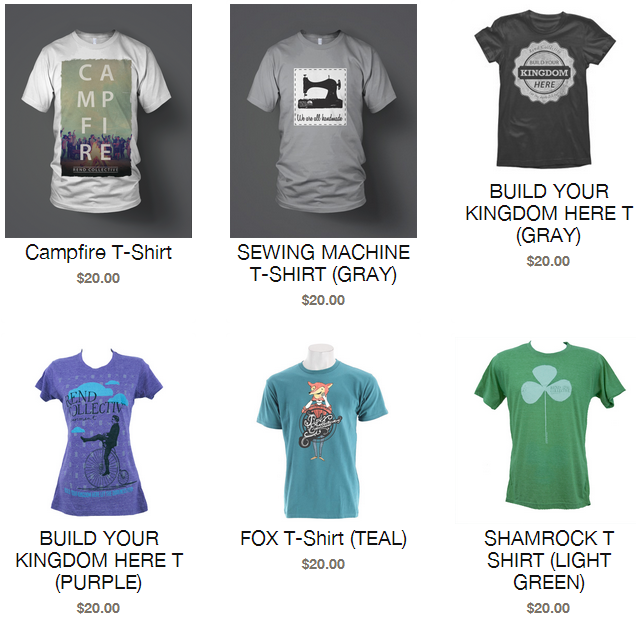 All in all, it was a wonderful evening of worship. This was our first time seeing Rend Collective Experiment, but I can assure you they’ve made me a fan for life. And I’m looking forward to many more concerts and nights of worship in the future. I just hope next time U2 opens for them. 😉