Introducing Our God Over Bacon T-Shirt

At the Iowa State Fair you can get a Bacon Mac N Cheese as well as a Chocolate Covered Chunky Bacon Maple Nougat On-A-Stick. 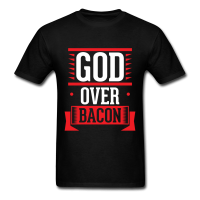 Our God Over Bacon t-shirts are available for $15.99

And of course there are plenty of bacon related t-shirts for sale like these shirts from Life Is Good, Busted Tees and Think Geek.

A few months back, a Lighten Up Gear fan suggested I produce a God Over Everything t-shirt. I’ve seen a few of those around as well as Bizzle’s God Over Money t-shirt, but that simply isn’t our style. Being that we’re from a bacon-rich part of the country, we thought it would be more appropriate for us to come out with a God Over Bacon t-shirt now available in our online shop.

While I don’t know how it would be received at Baconfest, it might make for a good conversation starter…that’s for sure.